The Great Whernside Fell race Photos can be seen on http://racingsnakes.com./Great_Whernside_fell_race.php.  The great Whernside feel race starts at 11:30am on Saturday 26 October 2013 from the old campsite in Kettlewell.  Photographs of the race will be available soon after the race.  Kettlewell is a pretty village in the Yorkshire Dales National Park.  The race route of the Great Whernside fell race leaves the old campsite and heads up for a steep start, this gets slightly easier for a while and heads up to summit Great Whernside. (not to be confused with Whernside – one of the Yorkshire three peaks).  The fell runners descend at breakneck speeds and it is great spectators sport.  Although this is a short race of 4miles, the route ascends (and descends) nearly 1600ft of climb with mixed terrain for the runners to cope with. There is a mix of good short grass fields, slippery rocks and boggy marshes which captures out more than the odd runner out. 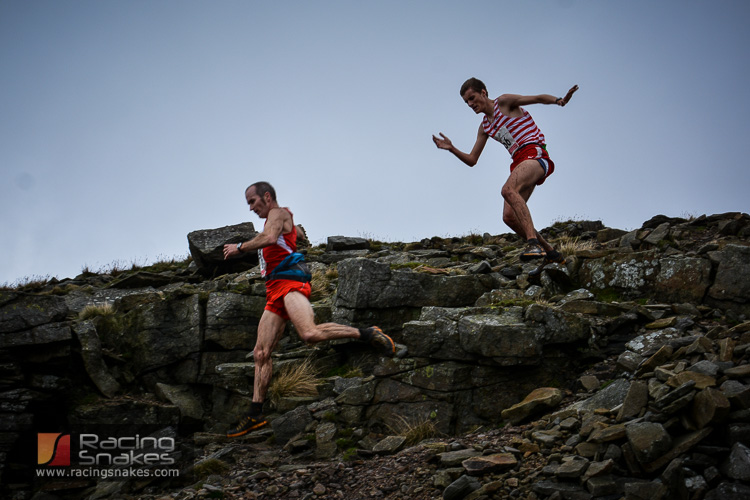 The fell race is usually quite well attended and the fastest runners can make short work of the course in just over half an hour. The organiser for this race Pete Jebb.  Say hello if your at the race and I will certainly be trying to capture your best side for that great photo. 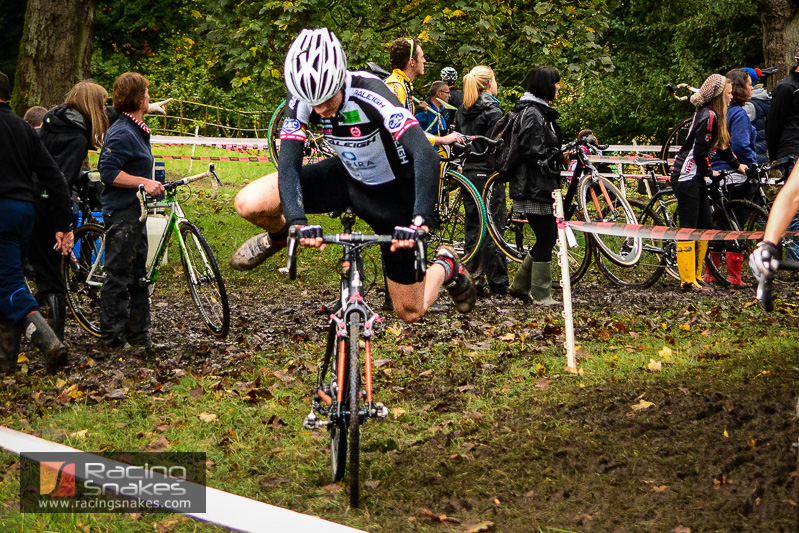 Cyclocross photos from Broughton Hall Rapha Supercross cyclocross race, Skipton 2013 will be posted on racingsnakes.  Saturday 19 October 2013 sees the first of the three race series of Rapha Supercross cyclocross racing.  The cyclocross race will take place in the grounds of the majestic Broughton Hall near Skipton. Racing snakes will be to take photos.  The pics will be available to buy in high res. Cyclocross is off road cycle racing, the bikles used are very similar to road bikes in that they have dropped handlebars and the same size wheels as road cycling.  A lot of cyclocross bikes are now using disk brakes (similar to those found on some mountain bikes) over rim brakes.  The clearance between the frame and the wheels tends to be greater than found on road bikes to allow the wheels to shed the mud.  The tyre size is slightly wider than on a road bike.  Some of the newer bikes will have 22 gears and tend to be easier gearing for climbing the steep hills.  Frame size tends to be slightly smaller than road bikes to allow the riders better control. 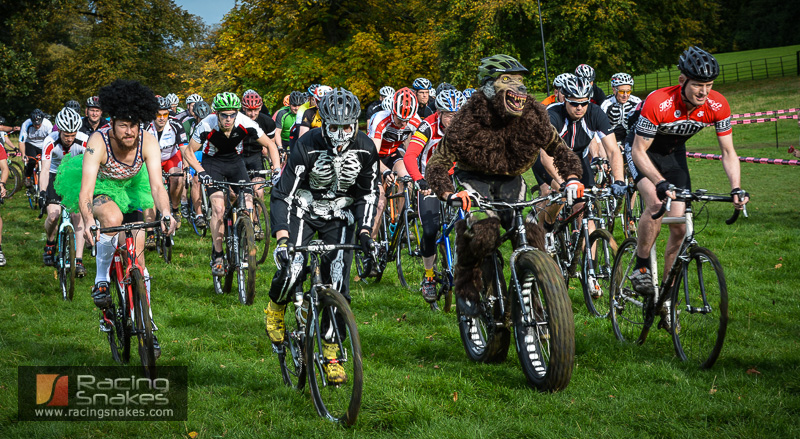 There are a number of races taking place from kids races to the high energy elete mens races.  For the first time there is also a womens race.  There is also a fun race with added obstacles including the ‘Spiral of Doom’ and the ‘wall of foam’.  Entry to the event for the spectators is free and as well as the racing there will be music and refreshments.  The fun starts at 10:15 with the under 10 and 12 year olds races.  The mens elite mens starts at 1.30pm and the “fun” race starts at 2:30pm.  There is guarenteed to be spills and thrills galore and the event will be well attended.

The racers get little rest as the next in the series is the following day at Phillips Park in Manchester with a similar itinary.  The final race in the series heads South to Alexandra Palace, London on 27 October. 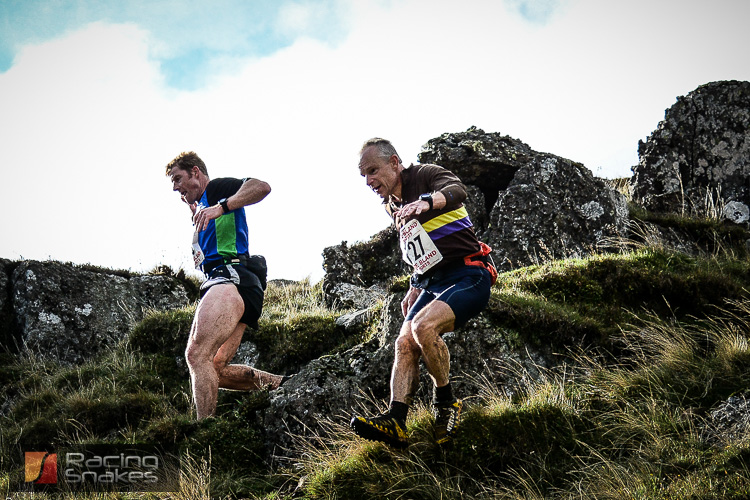 Langdale Fell Race Photos 2013.  Photos of langdale fell race. On Staurday 12 October 2013 the Langdale Fell Race took place.  I decided I would test a new camera lense out, it was all a bit last minute.  The Langedale Fell Race sets off from near the Old Dungeon Gyhll Inn in the LangDales and sets off in the direction of the New Dungeon Ghyll.  Just a quick plug for a friends bunkhouse which is located here, a great spot and close to two lovely pubs and more adventure than you can shake a stick at http://www.greatlangdalebunkhouse.co.uk/.  The Langdale Fell race continues up the steep gully heading up towards stickle tarn. before heading in an anticlockwise direction taking in Pavey Ark, Pike of Stickle, Bow Fell, Crinkle Craggs and Pike of Blisco.

My plan of action was to climb to the summit of the Pike of Blisco (705m) before the first runners arrived.  The day was better weather than expected with pretty clear visibility on the tops except a bit of cloud cover on Bowfell.  I was hoping to get some shots of the runners of the Langadale Fell Race summiting the Pike of Blisco capturing the stunning backdrop of the Langdale Peaks.  From the summit of the pike you have a great view over towards Crinkle Craggs and it would be psooble to watch the runners descending to Red Tarn before the ascent.  The first of the runners were spotted right on schedule and excitement grew on the peak.  There were about ten people on the summit including marshalls all eagerly awaiting the arrival of the first runners. 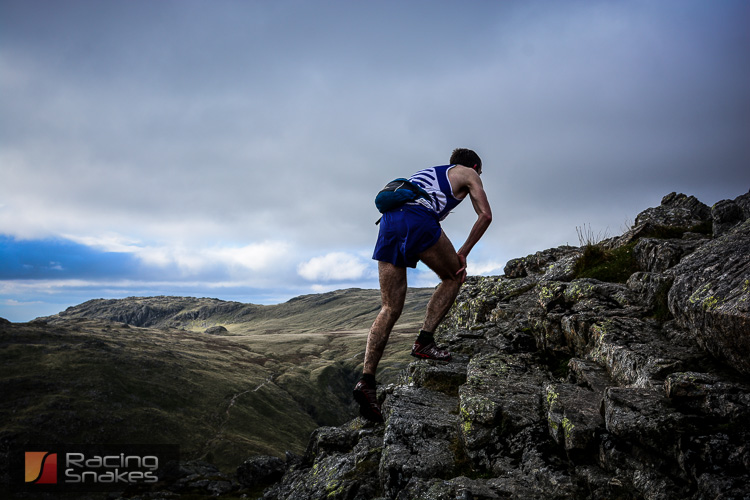 I got my camera ready and started taking photos.  There were a couple of routes off the summit which could be taken but most took the obvious line.  I spent 20 inutes on the paek scampering around before descending off the hill capturing photos of the runners as they descended.  The art was guessing which line the runners would take, and there were many variations.  I was kept busy running from spot to spot.  The results of the days work can be seen on racingsnakes.com 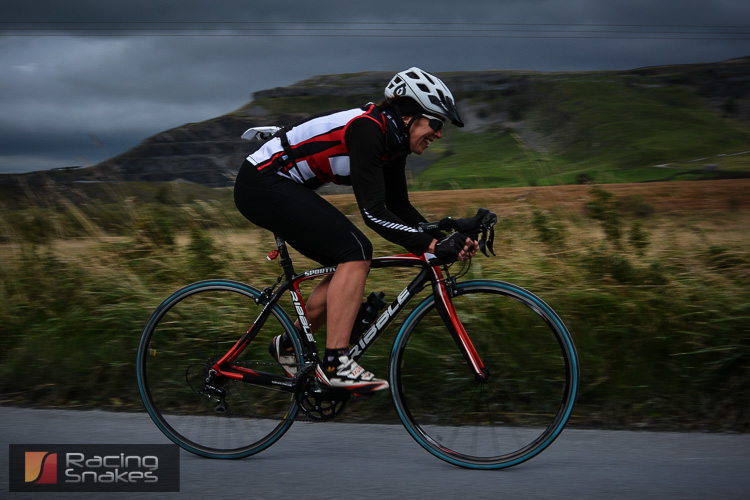 The Helwith Bridge Duathlon route starts with a 4 mile run.  The route heads the runners out from Helwith Bridge  to Little Stainforth, there is a great campsite here called Knight Stainforth.  The run route of the Helwith Bridge Duathlon heads down the small lane at the side of the campsite and over the very narrow bridge over the river Ribble (located at the side of the bridge on the campsite side is Janets Foss waterfall, at this time of the year Salmon can be seen jumping up the Foss in their annual trip to spawn).  The runners head up the short sharp hill to the main road, here they turn left and head back towards Helwith Bridge and the first transition.

Once at Helwith Bridge the ahletes put on their cycle helmets and bike shoes and head out on the second stage of the Helwith Bridge Duathlon. The cyclistshead out on loop round ingleborough in an anti-clockwise direction.  The riders head out to Horton in Ribblesdale and continue towards Selside and the famous Ribblehead viaduct.  From here there is usually a head wind as the riders head towards Ingleton passing the White Scar caves.  Just on the outskirts the riders take a left on Clapham Old Road.  The first 2 miles along this road is a good steady climb towards Cold Cotes junction (this is where the 3 peaks cyclocross racers rejoin the tarmac after scaling Ingleborough).  Once at Clapham the riders head towards Austwick.  There is a point where riders have previously had to do a short section on the A65 (a notorious accident blackspot) a new cycle path has been put in place here.  Once the riders reach Austwick it is a steady mostly uphill ride back to the next transition at Helwith Bridge. (except for the last half mile which is downhill). 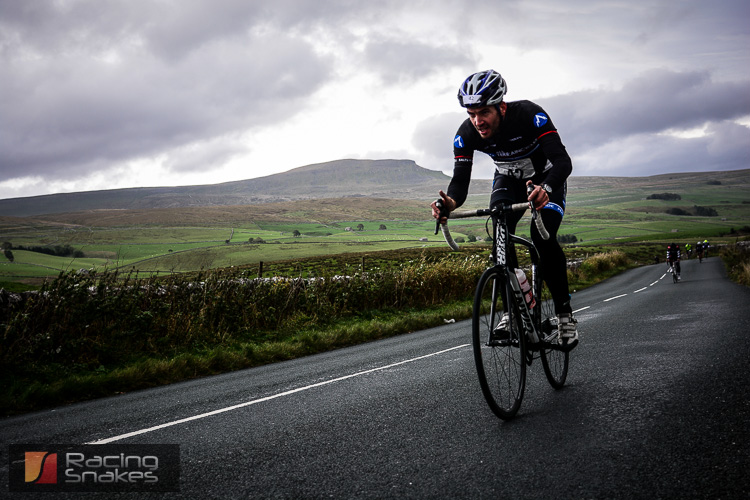 The overall distance of the Helwith Bridge Duathlon is 8 mile run and 23 mile bike.  The 8 mile run is actually two four mile runs, broken up with the cycle stage.

The Lakeland Trails photos from Coniston 2013 will be seen here as soon as possible after the race. The Coniston Lakeland Trails race took place on Saturday 6 October 2013, photos can be purchased from racingsnakes;

To purschase a photo make a  note of the album name and photo number, then email mick@racingsnakes.com (if the race number is visible this also is a great help). Each photo will be digitally enhanced before sending out the high resloution image for only £5. Payment is upon receipt of the image. 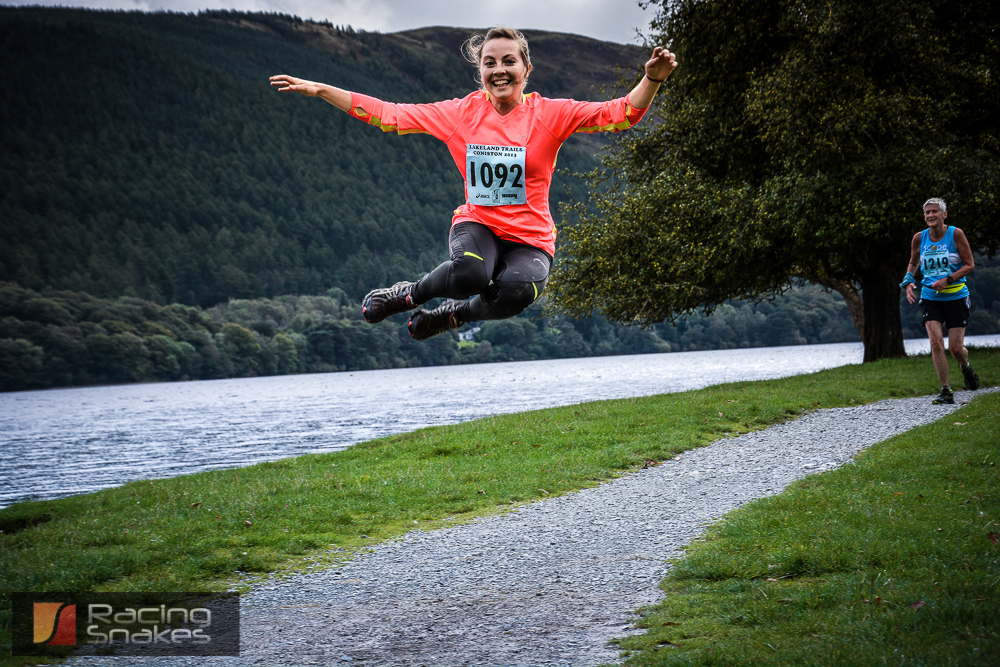 The Lakeland Trails are a well established company that offer trail runs in and around the Lake District National Park. The Lakeland Trails Races, and have good amount of loyal followers that race every race they put on.  This is the sixth race of the 2013 series. There are 3 Lakeland Trails races on the day, the first race will be the 10km run around a flatish route that sees the runners finishing with a final run in along the shores of Lake Coniston.  This race is ideal for those starting out in trail running.

The second start will be the Lakeland Trails Challenge, this is a much tougher 15km route than the 10km run, not just because it is a further 5 kms but the fact that the Lakeland Trails route heads into the foothills of ‘The Old Man of Coniston’.  Don’t worry you don’t summit the mountain but the ascent up to the old copper mines is enough to get the fittest runners out of breath.  Once climbed the far reaching views are fantastic and worth the discomfort felt from climb.  The trails are well marked out and marshalled, safety cover is also provided but rarely needed.

The third race of the day is the Lakeland Trails race, this follows the same route as the challenge but usually attracts the more serious runners and club runners. 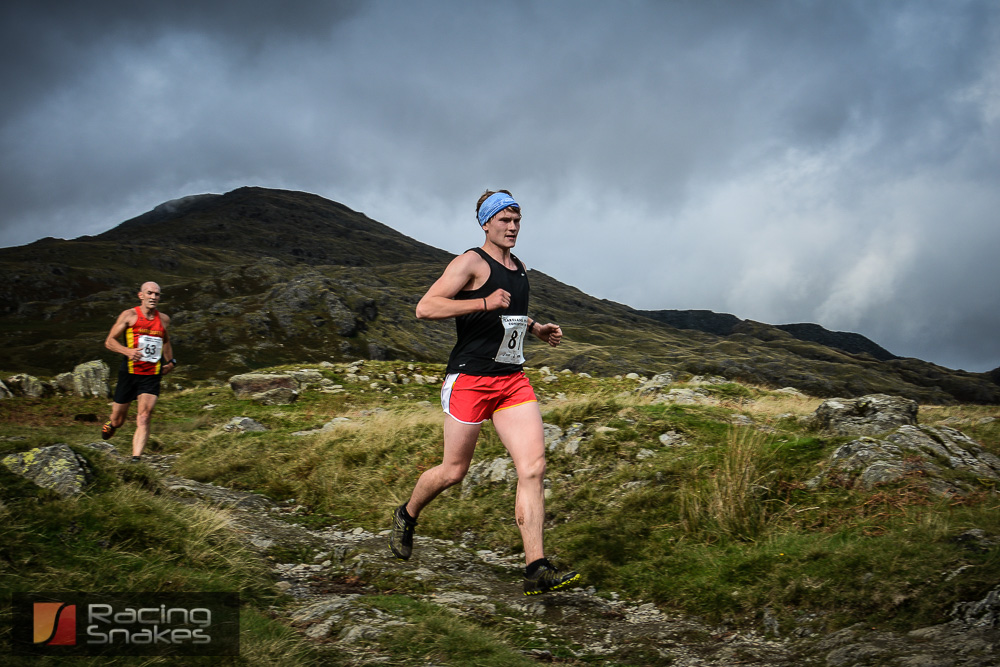